A six-event calendar, 12 races and the usual opening round in Monza: the Lamborghini Super Trofeo Europe is ready to get back to the track. The ninth edition of the one-make series for the cars of Sant’Agata Bolognese will kick off this weekend (April 21-23) on the Monza circuit. The first five rounds will be taking place on the same weekends of the Blancpain GT Series, the famous championship promoted by SRO Motorsports. The final round will be held at Imola, along with the World Final, which will take place in Italy after five years.

The four driver categories of the Lamborghini Super Trofeo Europe, namely PRO, PRO-AM, AM and Lamborghini Cup, have been confirmed also this year, with an international and high-level line-up. Many are also the new features, with a presence of almost 20 teams.

In the highest category, the focus will be especially on the young drivers, the true lifeblood of Lamborghini competitions; the company has dedicated to them a growth path by establishing the Youngster Programs. This growth program also involves teams and uses the four continental series of the Lamborghini Super Trofeo (Europe, Asia, North America and Middle East) as a springboard for the main GT championships worldwide, as recently demonstrated by some teams which are now taking part in international competitions with their Huracán GT3s, after gaining some experience in the one-make series.

It is also worth mentioning the constant change of protagonists, starting from the PRO class, which will be a real area of confrontation between three illustrious sons of motorsport legends. Two of them will share the cockpit of the car of Bonaldi Motorsport, which will see the debut in this category of the eighteen-year-old Brazilian Pedro Piquet (his father Nelson won three world F1 titles between 1981 and 1987) and the Venezuelan Johnny Cecotto Jr., son of the former F1 driver and champion on two wheels, Johnny Alberto. In the past two seasons, Piquet took part in the FIA Formula 3 European Championship and previously won two Brazilian titles in his category. Cecotto participated in GP2 Series for several years and has been a F1 test driver for various teams.

Among the “new entries”, there is the seventeen-year-old Jonathan Cecotto, Johnny Cecotto Jr.’s brother, who will be at his debut with Imperiale Racing beside the expert driver Vito Postiglione. The latter, after fighting till the end for the title last year, is ready to take another challenge with the colors of Ivano Pignatti’s team. 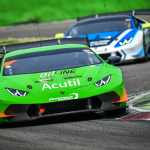 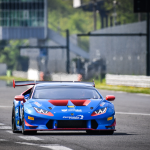 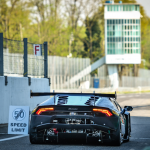 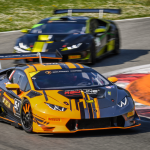 The level will be equally high also in the PRO category, with the confirmed presence of Rik Breukers and Axcil Jefferies (aged respectively 18 and 22). The two drivers have already conquered the title of the Lamborghini Super Trofeo Middle East with GDL Racing earlier this year and are now aiming at winning, with the same team, that of the European series, where the former got very close to success in the PRO-AM class in 2016.

What is new is instead the crew fielded by the team Antonelli Motorsport, which has reconfirmed the presence of Loris Spinelli, 2015 PRO-AM champion, who will share the cockpit of the car with the twenty-four-year-old Canadian Mikaël Grenier, who has some experience in the American Indy Lights and is at his debut in the Super Trofeo.

In the same PRO class, the team VS Racing will also field a new crew formed by the Brazilian Raphael Abbate, already a champion of the South American F3, and the Japanese Yuki Nemoto, who gained some experience in the Italian GT Championship with Vincenzo Sospiri’s team last year and scored four wins with a Huracán Super Trofeo. The team Leipert Motorsport has also renewed his commitment in the championship and in the PRO category, they will field two new drivers: the 23-year-old Australian Morgan Haber and the Pole Jan Kisiel.

In the PRO-AM class, one of the top crews of the team Konrad Motorsport is surely that formed by the German drivers Hendrik Still and Paul Scheuschner, who also participated in the Lamborghini Super Trofeo Middle East. The team Antonelli Motorsport will field the 18-year-old driver Kikko Galbiati, who debuted during the past season in the final round in Valencia and immediately scored a victory in the AM category. He will share the cockpit with Davide Roda, who won the opening round of the Middle East Series in Abu Dhabi last February. In the same category, the team ArtLine will be able to count on two expert drivers such as Shota Abkhazava (winner of the AM title two years ago) and Gerhard Tweraser. The team will also field a car in the PRO category for Sergey Afanasiev and Kelvin Snoeks. Fabio Onidi, another driver with some experience in the GP2 Series, will debut with Automobile Tricolore and will share the cockpit with another Italian driver, Raffaele Giannoni.

In the AM class, the team Bonaldi Motorsport will see the return of Eugenio Amos and Mirko Zanardini.

In the Lamborghini Cup, instead, the Dutchman Gerard Van der Horst (Van der Horst Motorsport) will try and defend the title conquered in 2016 and will have his teammate, William Van Deyzen , among his opponents.

It is also worth mentioning the return of the team Autovitesse with the 2013 AM champion Laurent Jenny, who will share the cockpit with Cyril Leimer.

The first of the two 50-minute races (with a rolling start and mandatory pit-stop) is scheduled on Saturday at 3:00 p.m.. Race 2, instead, will take place on Sunday at 11:20 a.m.. The two free practice sessions, each lasting one hour, are scheduled on Friday. The two twenty-minute qualifying sessions defining the starting grid of the two races will be held on Saturday. Both races will be broadcasted in live streaming on http://squadracorse.lamborghini.com/live-streaming.